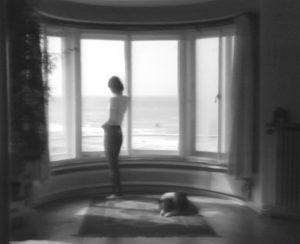 One of Kohta’s ambitions is to be experimental. It is an added responsibility, not a license to offer less precision. No one knows this better than Belgian artist Lili Dujourie (born in 1941, lives in Lovendegem).

Since the mid-1960s, she has been working on some of the core problems of how to articulate visual thought in art: the relation of painting to sculpture, of image to object and of bodies to actions. She has explored a succession of materials and techniques: steel rods and plates, torn coloured paper, analogue video and photography, velvet, marble, plaster, lead, flattened iron wire, ceramic, papier-mâché.

Throughout her oeuvre, Dujourie has shown her belief in the power of the visual – by never disavowing the importance of the political. She has convinced us that thinking through art, within art, mustn’t be written off as conservative – by never renouncing her quest for what we might call ‘the beauty of meaning and the meaning of beauty’.

The exhibition at Kohta (her first ever in Finland) consists of just three works, selected to form a condensed survey of a distinguished career.

‘Amerikaans imperialisme’ (American Imperialism) was conceived in 1972, at the height of European protest against the Vietnam War – and of the dominance of American minimal and conceptual art – as a series of commutative possibilities involving a wall, a sheet of steel leaning against it and paint. The wall is painted, except for the part right behind the sheet, while the sheet may be either painted or unpainted. When we move around the work we realise that everything happens in that unpainted gap, in what is partly hidden.

Between 1972 and 1981, Dujourie made almost 20 black-and-white analogue video works, now considered crucial contributions to the art of the 1970s and to female agency in art. In most of them, she herself appears as the ‘body in action’. Yet they are not short narrative films or documentations of performances but a format unto themselves: both painting and sculpture and neither, abstract spaces with concrete bodies that bring art history to new life.

At Kohta, this creative period is represented by ‘Passion de l’été pour l’hiver’ (Summer’s Passion for Winter) from 1981. The exhibition then skips many in-depth explorations of various materials to arrive at Dujourie’s latest, and to date last, body of work. ‘Ballade’ is a series of 20 sculptures in papier-mâché and papier-déchiré from 2011, enhanced with metal pins in 2019, of which we are showing 14.

Dujourie takes professional pride in being ‘at the edge’ of creating meaning. These renderings of medicinal plants are no exception. Both delicate and dangerous, some of them would be life-threatening to humans if taken in the wrong dose. But can we, humans of today, even mention nature, let alone look at its reflections in an art exhibition, without pangs of remorse and shame for allowing it to become destroyed so fast?